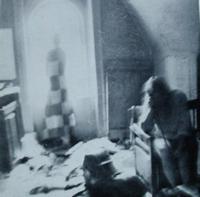 In a Danish hippie collective located in Copenhagen in 1968 a band called "Furekåben" was formed. Since "fure" means three different things in Danish it is hard to decide on how to translate their name to English. The band was formed around Hans Vinding (guitar & vocals) of Hyldemor "fame". After two years of writing sessions in the collective they released their first album "Prinsesseværelset" (The Princess' Room) and would eventually release a second LP under the title "2nd" or "Furekåben 2nd" in 1971 only to disband a year after that, which led to the formation of Hans Vinding's other band "Hyldemor". Through the years the line-up of Furekåben varied quite some, the members (besides Hans Vinding) through the years were Thorbjørn Thomsen (guitar & vocals), Mikkel Bayer (cello), Søren Barfoed (flute, 1968-69), Vivi Jo Heede (vocals), Jens Thorning Hansen (guitar, 1969-72), Anthony Barnett (flute & percussion, 1969-72), Emmerik Warburg (flute, 1969-72) and Steen Claesson (violin & guitar, 1971-72).

An interesting fact about this record is that it was released with lots of different covers, but the one in this post being the most commonly known cover today. Musically the album seems more like a protest or moaning than an actual music album. The first track starts off with some promising guitar patterns and with somewhat loud percussion parts, in which it seems that pots and pans were used for percussion rather than percussion instruments. The vocals are classic psych folk, but will at some points drown in the horde of different instruments played at once. The strings (cello) on this track are worth accentuating though, as they add a great mood to the song . Following up is the long excessive repetitive second track which is introduced by a quite annoying arrangement of the violin, but contains much clearer and better vocals, which are really fun for the Danish listener as their lyrics are quite funny at some points. The third song has much more to offer than the first two, which probably is for the best as it makes up a half of the entire album. It has deeper aspects and a nice use of percussion. Overall the lyrics and expression seems more important to the group than the music itself. It has a good folk vibe comparable to Trader Horne and a lesser fuzzy version of Trees and the like. At some points the album is great, but some times it seems very bad too. Recommended for fans of Trader Horne and fans of all things repetitive.