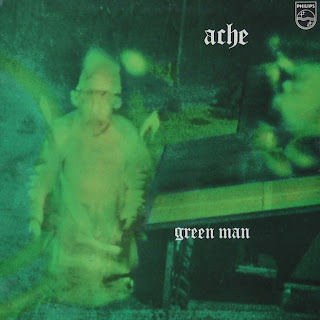 Before Ache eventually split-up in the summer of 1971. They released Green Man, which was their second and final album. The line-up on this album is the same as on their debut. When 1972 came, Finn and Torsten Olafsson moved to the country. Finn started focusing much more on acoustic guitars and Torsten adapted a lot of different instruments including piano and vibraphones among others. Eventually this led to a collaboration between the Olafsson brothers and a Polish singer called Andrzej Kosciuk. They formed the trio "Acoustic Ache", which managed to play a few gigs before Andrzej left the group due to personal issues and returned to his native land.

Green Man is a real masterpiece. On this album the group dropped the long progressive suites they had delivered on their debut record and started playing shorter, but also better compositions. The album contains lots of great passages of improvisation and mellow melodic pieces as well as some heavy pieces. The record is really enjoyable as the production value of the album is top notch as well. The organs sounds really really great, and so does every other instrument and every note strummed by Ache on this forgotten gem! The record can be compared to the likes of Beggar's Opera and Fuzzy Duck. Some highlights are "Equatorial Rain", "Green Man" and "Acheron". The group really topped their first record with the release of Green Man.