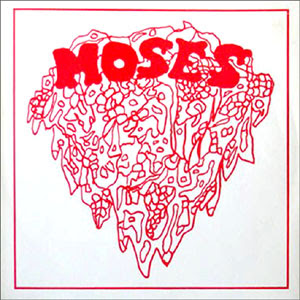 Little is known about this gem, but I've done my best retrieving information about the group and this is what I came up with. Moses were a Danish power trio formed in Esbjerg in 1969. Musically they played very blues inspired hard rock. In my opinion they are the Danish version of Black Sabbath. The album contains some rocking solos, nice heavy riffs and classic 70's lyrics, but Moses also suffer from the fact that their singer had a very strong Danish accent, which may ruin the record for some. Unfortunately this was the only album they ever released. The band consisted of Søren Højbjerg (guitar), Jørgen Villadsen (bass & vocals) & Henrik Laurvig (drums & vocals).

The original record from Spectator Records was only released in an amount of a thousand, but it has been re-released on cd as well as lp by a German record company.
Before Moses, Jørgen Villadsen and Søren Højbjerg had played together in the blues band Fresh Boiled.
It is believed that Søren Højbjerg today is the head of a booking buruea.
Henrik Laurvig is today the tour manager of the Danish blues musician Johnny Madsen as well as a salesman and a concert-organizer.